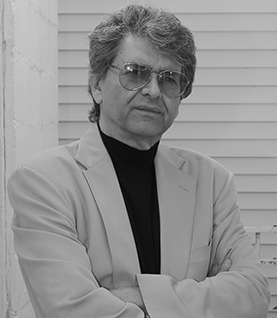 Richard Cirulli is a Westchester County resident and a retired professor. Now living life as a bit of a Renaissance man; working as a playwright, writer, author, columnist, photographer, poet, artist, actor, guitarist, songwriter, and producer. He is also the past Executive Director of the Barrett Art Center, Poughkeepsie, NY. The playwright holds two , a number of masters’ degrees and undergraduate degrees in various fields ranging from engineering, business, social sciences, management, and theology
7

The playwright’s work is influenced by such notable Existential philosophers as, Dostoyevsky, Camus, Buber, and especially the Danish Philosopher, Soren Kieregard- whose works are the inspiration of this plays.

Existential originality addresses sensitivity to those human values which the ordinary person and classical philosophy and religious tradition tend to overlook. Contrary to what people think, Existentialists are not nihilists; rather it is their belief that frustration and disillusionment are integral facts of the human condition. Kierkegaard refused positions and opportunities that would render him a comfortable life, and used his talents to bring ridicule upon him, in the conviction that comfort, money, and public approval are inferior values. In his view that sacrifices do not come easy. His view of salvation would agree with that of Spinoza: “If salvation lay ready to hand and could be discovered without great labor, how is it possible that it should be neglected by almost everybody? All noble things are as difficult as they are rare.” Epictetus, the slave philosopher is quoted as saying “we cannot command goods such as wealth, pleasure, or fame. But can command our hopes and fears, our desires, and aversions, since these have their sources within us. As Kierkegaard put it, he wants a value by which he is prepared to live and for which, if necessary, he is willing to die.

The Thoughts behind the Words of the Playwright

The playwright is an intellectual and a very abstract existential and cerebral thinker. He is known for his open-mindedness, and not being held hostage to the biases and restraints labels and agenda’s imposed on humanities ability to grow- in essence, impeding our anthropological psychological growth. A Freethinker in the truest sense, or as Rich is more commonly known as an innocent bystander. He plays are neutral when it comes to those issues that are dividing our country today- a true believer in the importance of using discourse to build bridges between opposing ideologies, as opposed of damming our future with uncompromising egocentric positions.

True to his convictions, the playwright believes that the constructs of our self-imposed labels (all well intended) we place upon ourselves today are the response to a perceived threat or injustice in need of correction. And in essence, all of society’s ills and divisions are symptoms of the greater problem of our humanity in distress. His plays are a Socratic approach into viewing our frail human condition, not to be judgmental, but rather is an attempt to straighten the crouched timber of our humanity.

If the universe was formed from a very hot small and dense super-force
out of nothingness
Who created the very hot?……….. And what is nothingness made of?

If a creator god made this universe where did he live before the he
created the universe?
And, is God an only child?

You can also follow the Playwright’s work by reading his monthly column, The Boomerang, in “The Examiner News” ( White Plains edition) and at www.Yonkers Tribune, his bi-weekly talk show is also on the Yonker’s Tribune website.