Thoughts behind the Words of the Playwright

The playwright is an abstract and analytical freethinker known for his open mindedness, and resistance to being held hostage to the biases and restraints of labels and agenda’s. His views are existential, pragmatic, and balanced with a spiritual social conscious. As an artist and philosopher the playwright uses his writings, plays, and music as a tool in an attempt to straighten the crooked timber of humanity. The following are a sampling of his stories and poems.
7

Poems and Short stories by Richard Cirulli
All rights reserved

A Thought for Today

Snow Angels in the Dust

The Mystic and the Atheist Alfresco

(A short story from Richard Cirulli performed by Susan Bond)

A Turn of the Page

(Words and music by Richard Cirulli’s all rights reserved. Performed by Susan Bond)

A Matter of Time

The Color of Tongues

My Rite of Passage

The Songs of Roland
The Return of the Cathar Magi

Book Description
Roland is a recently divorced aging baby boomer now living the life of a
spiritual seeker, intellectual, existentialist, artist who is also secretly
battling an incurable disease, as he faces his enigma of navigating the desires of
the flesh without corrupting his soul. A man of harsh self-criticism, discipline,
and honesty, he is earnestly fearful of being labeled a hypocrite. He is driven
with the idealism to assist humanity in distress. Roland is no or a Don
Quixote, rather a moralist who stands up against the injustices of life at all
hazards. He is viewed as an avant-garde intellectual philosopher and artist
within the arts and academic community, though among his intimate women
friends he is known for his spiritualism, sensitivity, honesty, respect for women,
and his quest for a higher self – at times viewed as a paradox, an anachronism,
and contradiction. Though his profane detractors regard him as a threat and as
much an idealistic fool.
Roland, raised in a devout Catholic home, begins his spiritual quest in his
youth after receiving a series of visions that take him on his arduous path to the
western hermetic tradition of Gnosticism, the Kabbalah, and esoteric
Freemasonry. Eventually achieving the grade of magi and adept of the
illuminati order – a secret he guards jealously, known to just a few confidants.
Through a number of synchronistic events, Roland finds himself intimately
involved with Candice, one of his former college students. As the relationship
grows and Candice moves into his loft, Roland is plagued with a consistent and
nightmare of being burnt alive at the stake for being a Christian
Heretic in Southern France during the Albigensian Crusade of the 13th century.
Roland believes this is an omen for his immoral transgressions, and he will be
cursed to burn in the eternal damnation of hell. Before dying Roland is given a
heavenly vision that reveals both Candice’s and his true identities and missions.

About the Author
Richard Cirulli is a retired professor, now living a spiritual artist’s life. He holds two PhDs, a number of masters degrees,
and undergraduate degrees in various fields. A former professional student, he is now enjoying life as a bit of a Renaissance man: a playwright, writer, columnist, photographer, poet, artist, guitarist, songwriter, actor and producer. Two of his
original plays, “Via Delarosa” and “Roundelay,” were recently performed at White Plains Performing Arts and received rave reviews. Richard has been on a spiritual journey since his early childhood when he had his first mystical vision, which opened the portal to his mystical quest. His
quest led him to his study and membership into the higher degrees of Freemasonry, the Rosicrucians, The Martinist Order, the Qabalah, Theosophy Christian Gnosticism, among others. He holds a in Sacred Science from the International College of Esoteric Studies. He is also certified in REIKI, and Nutrition and Herbology. He has written twelve volumes of metaphysical poetry and meditations. Richard has embraced walking the arduous path of wisdom to assist in distress.

The Songs of Roland: The Return of the Cathar Magi

is available Amazon.com, Barnes & Noble and many other fine retailers worldwide 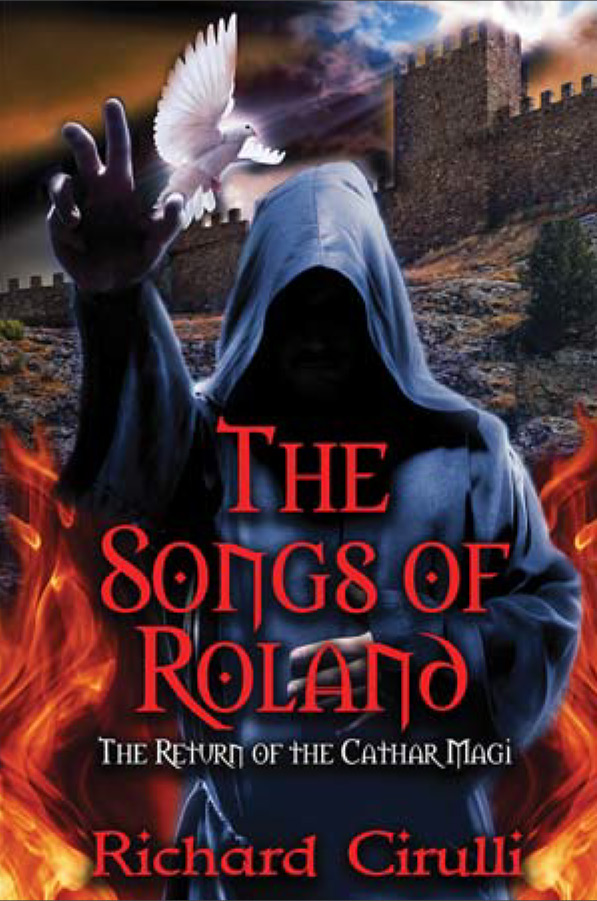 You can also follow the Playwright’s work by reading his monthly column, The Boomerang, in “The Examiner News” ( White Plains edition) and at www.Yonkers Tribune, his bi-weekly talk show is also on the Yonker’s Tribune website.